Disgraced New York Gov Andrew Cuomo was nowhere in sight Tuesday but garbage from his decade in power was seen being hauled out of the Executive Mansion in Albany.

A giant pillow, a blue mirror, and a guitar and drum set from the video game Guitar Hero among the items being tossed into a dumpster.

Staff were also seen throwing out boxes filled with old electronics and VHS tapes, while a New York work truck was bringing bubble wrap as Cuomo’s eviction from the place he’s called home since 2011 looms on August 24.

The governor’s daughters Michaela, Mariah and Cara were not seen during the cleanout today, either, but Michaela, 23, and Cara, 26, were spotted loading boxes of things and leaving the mansion in a black SUV late last week. 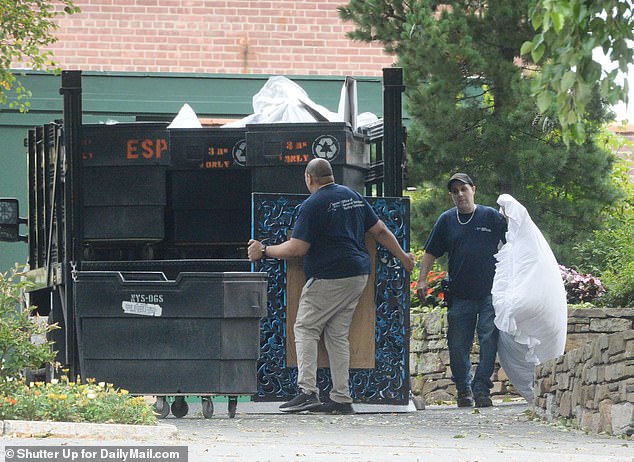 New York Governor Andrew Cuomo was nowhere in sight as staff were spotted outside the Executive Mansion bringing things to the trash, gathering bubble wrap and getting a head start on the Cuomo’s August 24 move 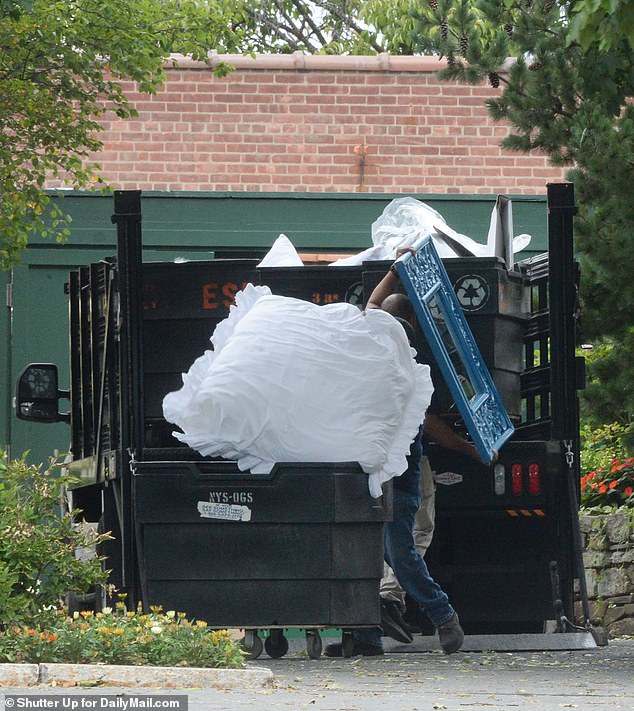 A giant pillow, a blue mirror and a guitar and drum set from the video game Guitar Hero were seen heading into the trashcan 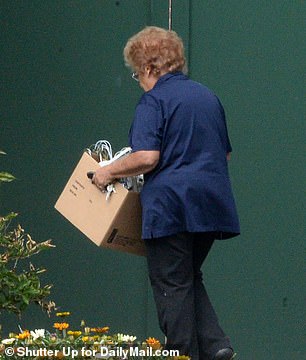 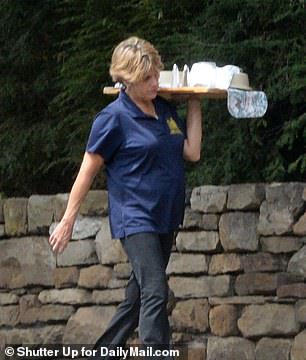 Cuomo only has one week left in the Albany residence after officially resigning in a 20-minute speech he gave exactly a week ago today in Manhattan.

In his resignation, Cuomo insisted he never sexually harassed any of the 11 women who lodged a complaint against the three-term governor despite a damning report from state Attorney General Letitia James.

It remains unknown where Cuomo and his family will live after moving out of the Executive Mansion, which boasts 40 rooms, a tennis court, two swimming pools and several gardens. 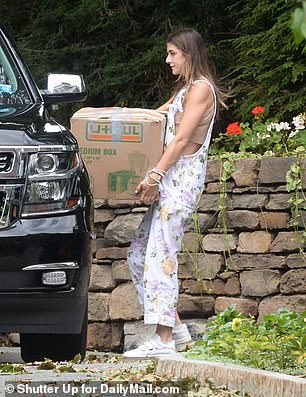 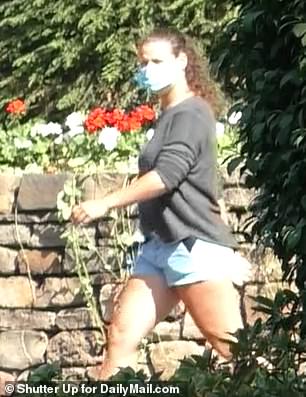 One of the rumored landing spots on where the governor will bunk down is at his brother Chris Cuomo’s $2.9million home in the Hamptons, where the CNN anchor  famously quarantined in his basement during the early stretch of the pandemic.

Another possible destination would be with his 89-year-old mother, who owns a co-op in Manhattan on Sutton Place South, which she and her late husband purchased for $595,000 in 1995.

Cuomo’s sister, Maria Cuomo-Cole along with her husband and fashion designer Kenneth Cole, have a number of holdings as well, with homes in Westchester County and Martha’s Vineyard in Massachusetts, the Post also reported.

And in 2002, economist Jeffery Sachs, reportedly let Cuomo stay at Financial District rental at 1 West Street after his divorce from Kerry Kennedy.

Cuomo told New York Magazine in his first interview after stepping down: ‘Um, I don’t know what I’m going to do.

‘I’m not disappearing. I have a voice, I have perspective and that’s not gonna change.’

‘And the details aren’t really that important to me to tell you the truth,’ he added. 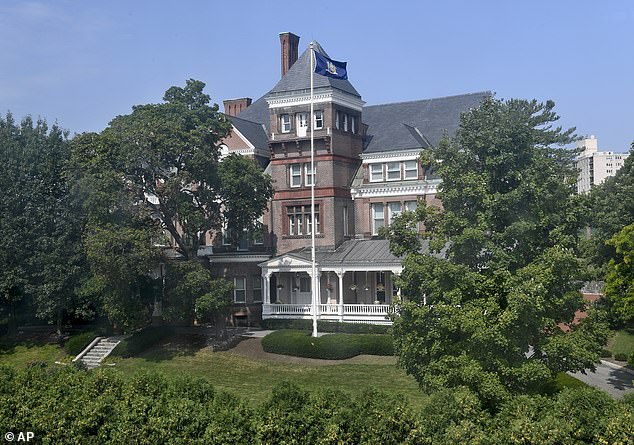 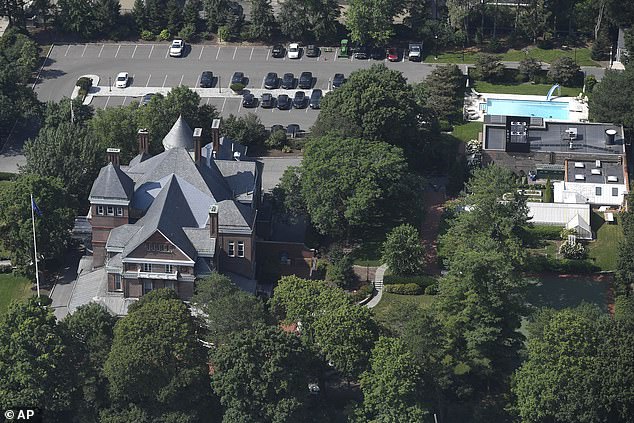 His last private residence was a four-bedroom, 4,129-square-foot colonial in Mount Kisco, Westchester County, which he shared with longtime girlfriend Sandra Lee from 2008 until they split up in 2019.

Cuomo has plenty of his own cash to find a home, including the $2million advance he has yet to be paid from his COVID memoir and his $50,000-a-year pension.

Last night, Chris Cuomo defended his own behavior during the sexual harassment allegations that have been surrounding his brother. He told CNN viewers that he was not an adviser to Governor Andrew Cuomo, but rather: ‘I’m a brother.’

The CNN anchor was on a week-long vacation when his older brother announced his resignation. He returned to the air and said he encouraged Cuomo to step down after 11 women accused him of sexual harassment.

‘I tried to do the right thing and I just want you all to know that,’ the younger brother said. 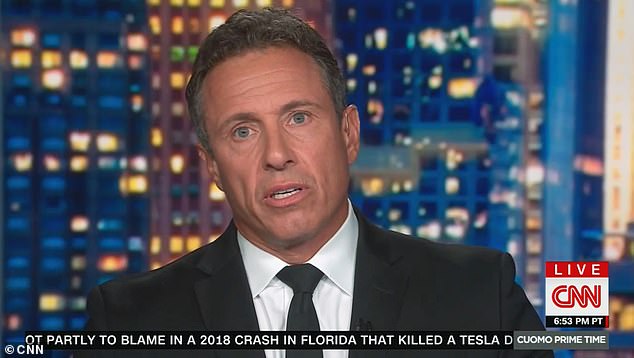 Andrew Cuomo – the highest paid governor in American history with a salary of  $225,000-a-year – could still be impeached even though he has resigned. Some lawmakers say they still want to go ahead with the proceedings because it would strip him of his pension and mean he won’t be able to run again.

Among the first to dance on his political grave were his long-time foes Bill de Blasio, the New York City mayor who he regularly sparred with during the pandemic, and Cynthia Nixon, whom he beat in the 2018 Gubernatorial race.

Republicans say Cuomo’s resignation shouldn’t be the end and that he must now be prosecuted for any sex crimes, and criminally investigated for the nursing home scandal that many consider his worst offense.

The Albany District Attorney’s Office confirmed its investigation into Cuomo was ongoing. The Manhattan DA and Westchester DA have not yet commented.

In Cuomo’s resignation speech, he addressed his three daughters, calling them his ‘jewels’ and saying he had ‘made mistakes and learned from them’, but insisted he was not the serial abuser the state Attorney General’s report made him out to be.

He said: ‘In many ways I see the world through the eyes of my daughters, Cara, Mariah and Michaela.

‘I have sat on the couch with them hearing the ugly accusations for weeks. I’ve seen the look in their eyes and expression in their faces and it hurt.

‘I want my three jewels to know this: my greatest goal is for them to have a better future than the generations of women before them. It is still in many ways a man’s world. It always has been. We have sexism that is culturized and institutionalized.

‘My daughters have more talent and natural gifts than I ever had. I want to make sure that society allows them to fly as high as their wings will carry them. There should be no assumptions, stereotypes or limitations.

‘I want them to know from the bottom of my heart that I never did or would intentionally disrespect a woman or treat any woman differently than I would want them treated. And that is the god’s honest truth.

‘Your dad made mistakes and he apologized and he learned from it. That’s what life is all about.’

Thu Aug 19 , 2021
The four facilities of the Fresno Convention Center – Exhibit Hall, Saroyan Theater, Valdez Hall and Selland Arena – are shown in this aerial view from Google Maps. A vacant lot is where a 200-room hotel is planned. TIM SHEEHAN Fresno Bee file A noted Los Angeles developer has expressed […]