At 5.30 in the evening outside a Community Resource Centre on the edge of Longford town 17 Roma teenagers are gathered in the open air as they take turns playing fast traditional music on electric instruments. There are walking bass lines, funky guitars on a ska off-beat, disco drums and distinctive melodies on piano and organ.

This is music for dancing too, though no one is dancing. Occasionally a few of the young men self-mockingly strike up dance moves and one pretends to spin an invisible turntable for a few moments before beatboxing. A girl bounces a small child to the beat. For the most part they stand around chatting, waiting their turn behind the instruments, shouting out suggestions or jokes or exclamations of approval. As the evening wears on, different young people slip in and out of the makeshift ensemble and all of them seem to be able to play several instruments proficiently.

“There’d be nights here and the lads are playing and if the sun is shining, you feel like you’re not in Ireland any more,” says youth services officer Mark Noble. “It’s a chance for them to really turn the music up and hear what they’re playing. Because obviously, if you’re living next door you don’t want 15 young lads blowing the head off you with the music whereas out here we’re a little bit isolated.”

This is a musical project that’s been fostered by both Longford Youth Service and the national music education programme Music Generation. The population of Longford is very diverse. This youth service has groups for Syrian refugees, for young people in Direct Provision, for Traveller young people and for LGBTI+ teenagers. They practise the “detached model of youth work” which means they go out and engage with young people on the streets where they hang out, getting to know them and their families, rather than expecting them to find the centre by themselves.

“The Roma youth group were particularly interested in music and when Music Generation came along last year we were able to link up with them and do some music workshops and music groups,” says Sarah Jane McNaboe, co-ordinator of Longford Youth Services. “It just grew and grew and grew.”

McNaboe and Noble are here supervising things and step in from time to time to ensure everyone who wants time with an instrument gets it. They sporadically have to shout, with good-humoured patience, over exuberant young people and loud music in order to be heard. They’re often assisted by 18-year-old Patrik Nistor who has lived in Ireland since he was four and acts as a sort of translator for those with less English.

Nistor has musical notation tattooed on his neck and he’s in a band with two of the other young men here, his cousin Miro Nistor and Dominick Sarissky. “We’re called Galaxy Band,” says Nistor. “If you play a party you could play to 600 people… There’s food and everything. People dance. But we can’t play because of Covid.”

They all try to explain the nuances of the different forms of music they play. All of it is some sort of fusion of traditional Roma music with western musical styles. One group of lads here favour faster funkier music with a brass section while the others like “disco-style” beats. They all suggest acts that I should listen to on YouTube. Most of the teenagers here are originally from Slovakia though Dominick Sarissky is from the Czech Republic. As a consequence, he tells me, he plays piano differently from the others.

“They hold their chords with their [left hand] fingers but I use my fingers for bass.” Like many, though not all, of the young people here, Sarissky was taught the basics of music by an older relative but is otherwise self-taught. He picked up bass guitar for the first time a few months ago and he is already a better bass player than most of the bass players I ever played with (sorry to my former bass players). He’s been getting into jazz. “Jazz is the best. There are loads of chords you can learn.”

As part of this programme Music Generation provides tutors. Several of the younger kids are getting classes. Fifteen-year-old Kristian Pompa, who has been slinging out funky guitar riffs all evening, learned to drum from his godfather when he was three (“I didn’t have drums, just sticks making the tempo”) but only started learning guitar just over a year ago. “I like playing,” he says. “I feel the music. I feel free when I play it. In my family, nearly everybody plays. Usually Roma people play music. If they don’t play, they sing. If they don’t sing, they play.”

From time to time, some of the other residents of Longford passing by on the road a few hundred metres away stop to peer over and see the source of the music. It’s an unusual sound in this country, although 18-year-old Miro Nistor says, “In my city everyone, even kids, can play this.” Miro came here 14 years ago from the city of Kosice in Slovakia and has been playing piano since he was seven. He has a tattoo of a crucifix with the words In God’s Hands on his forearm and a small religious icon of the virgin and child hangs around his neck. Playing music, he says, “calms you down. It’s relaxing.”

Mark Noble finds that having young people on-site once a week doing something they love gives the staff a chance to help them with any problems they might be having and to point them towards educational or training opportunities. Due to language gaps and simple lack of knowledge, he says, some migrant families are unaware of how the system works when it comes to college or apprenticeships. “It can be very hard to be the first in your family to do something like that without support.”

I imagine my life: I wake up in the morning and go

to work and I’m a Garda, and then in the nights I have concerts. I’ll be a singing guard

After a while, a 17-year-old girl with a powerful voice takes a microphone to sing. Her name is Stanka Pompova but her “musical name”, she tells me, is Shelly. She has a YouTube channel called Stanka Shelly Official. She begins singing a soulful version of I will Survive backed by Kristian’s 13-year-old brother David on keyboards. This duo are soon joined by a drummer, bassist and guitarist. They improvise around the chords until it evolves into an idiosyncratic Eastern European disco groove that was probably far from Gloria Gaynor’s mind when she first sang it. “We play as Roma,” says Peter Kroscen, the drummer. “We made it different.”

Shelly also sings a song called Me Tut Uzarav (I wait for you), and does so beautifully, but she later tells me she prefers to sing English-language pop or country songs. Her favourite singers are Celine Dion and Mariah Carey. She gestures in the direction of the other teenage musicians. “That is my culture of course, but my passion is English music.”

In Slovakia, she says, she experienced racism and bullying and she’s glad her parents brought the family to Ireland when she was 13. “They came here for a better life,” she says. She is determined and driven. She wants to be a famous singer (“My mom, she was famous when she was younger in Slovakia”) but she’s also remarkably realistic about this and is undertaking a pre-Garda studies course. “My dream is to be a guard and a singer. I imagine my life: I wake up in the morning and go to work and I’m a Garda, and then in the nights I have concerts.” She laughs. “I’ll be a singing guard.”

Music Generation: ‘Every child has the right to be a musical citizen’

Over the course of the pandemic, Music Generation has continued to run projects over Zoom and, when possible, in socially distanced or outdoor environments all over the country. These projects are diverse, a product of their partnership model which allows local groups to dictate the shape of the project that best suits them. Rosaleen Molloy, Music Generation’s national director, tells me about singing groups in Direct Provision and afterschool groups who have podcasts. There are harp orchestras, trad groups and opera writing projects.

Sixteen-year-old Dillon Hogan and his 15-year-old sister Danielle play clarinet and trumpet, respectively, in the Roscommon Youth Orchestra, another project run through Music Generation. They start with borrowed instruments. “I was given a flute mouthpiece and a clarinet mouthpiece, and given a week to see which one I could get a sound out of. And the clarinet is what worked for me.”

Danielle says: “I used to watch [the youth orchestra] performing and I saw girls playing the trumpet. So I went to the brass teacher and I asked for the trumpet…. I was actually surprised to see girls playing it.”

Were those instruments difficult to learn? They laugh. “It sounded like screeching dying animals in the early days,” says Dillon.

Over the course of lockdown they continued their lessons over Zoom and, more recently, they’ve been able to meet up to play with their specific sections of the orchestra. “When you have a piece that you can play well, you can just rip into it,” says Dillon. “I would find that very therapeutic.”

“You can put your own spin on it,” says Danielle. “If you’re angry, you can put more blast on it.”

Sixteen-year-old Isobel Fallon, also from Roscommon, is part of another music project that continued to create music over Zoom and with online recording software throughout the lockdown.

She was always interested in music, she says, first learning the bodhrán. After some failed experiments with the fiddle (“To be honest I just couldn’t listen to myself playing it”) she ordered a guitar with some birthday money when, she says herself, she was meant to be doing some online studying. “I really took a shine to it.”

As part of the Music Generation project, Fallon and her friends wrote and recorded a song. The project has paused for the summer holidays, she says, but she and a friend are planning to go busking soon. “When you’re playing music with each other, you’re teaching each other different things… I feel like an important part of music is other people.”

Megan Fox recalls how becoming a mom 'saved her': 'I needed an escape'

Mon Jul 5 , 2021
Megan Fox said becoming a mother “saved” her during a trivial period in her life. The model and actress, 35, who shares three sons with her estranged husband Brian Austin Green, opened up about the role motherhood played in her discovering herself when she welcomed her firstborn – son Noah […] 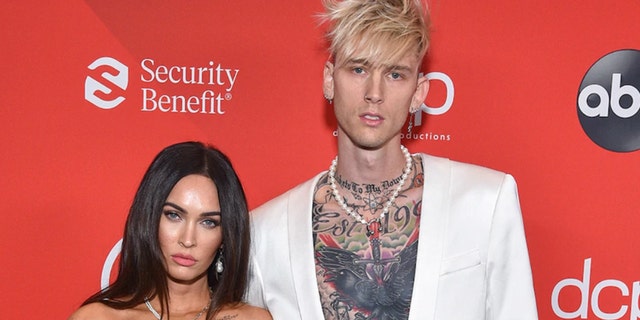