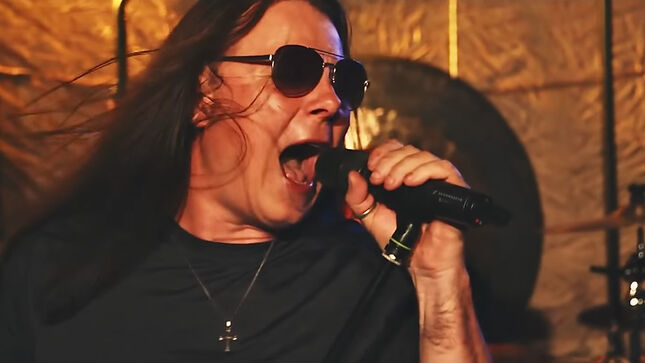 Memoria Avenue is a new melodic rock/AOR band from Norway showcasing an artistic union between guitarist Tor Talle and the awesome new singer Jan Le’Brandt. The band’s self-titled debut album will be released on November 5 via Frontiers Music Srl. Today, the band has released the first single and music video from the album, “Stuck”. Watch the video below, and pre-order/save Memoria Avenue here.

Memoria Avenue is yet another newcomer to the AOR scene brought to you by Frontiers Music Srl. Comprised of guitarist Tor Talle, vocalist Jan Le’Brandt, keyboardist Dag Selboskar, bassist Svenn Huneide, and drummer Bjørn Olav Lauvdal, Memoria Avenue create have a sound and style that will particularly appeal to fans of stylish, ’80s oriented melodic rock bands (think Journey and newer bands like Perfect Plan and Work of Art) with a hint of that breezy, feel good sound of yesteryear. Listening to these songs will transport you to the feeling of driving by the sea with the windows rolled down without a care in the world. Certainly not a bad feeling in this day and age…

Tor is a skilled and well known musician, best known for the Northern Light project and the band Skyscraper. He has also worked, either writing songs and/or performing with, on records from melodic rock giants such as Joe Lynn Turner (Rainbow, Deep Purple), Fergie Frederiksen (ex-Toto), Rob Moratti (ex-Saga), Steve Overland (FM), and the late Tony Mills (TNT, Shy).

Jan Le’Brandt, a relative newcomer to the melodic rock scene, has a voice that is sometimes hoarse and rough, but can also move into a more delicate and sensitive style. Jan masters the whole spectrum to the fullest, with his soulful presence both on stage and in the studio. He has already previously released some material as a solo artist, appeared with the cover band Svigermord, and formerly sang for Big City (also signed to Frontiers recently), but Memoria Avenue is his chance to truly shine.

Keyboard player Dag Selboskar (who also plays in Zelbo, another new signing to Frontiers), has been touring since 1980 with several bands including Da Vinci, Evenrude, Street Legal, and Trine Rein. He started his own band, Zelbo a couple of years ago with Ken Hensley and Wonderworld guitarist Ken Ingwersen.

Bjørn Olav Lauvdal is one of the most experienced heavy rock drummers in Norway and is known as a heavy hitter. He started playing drums at an early age and toured the club circuit in Norway early in his career. He has toured, recorded, and released albums with Street Legal, The Wheel, and Da Vinci. He has also recorded album tracks on releases by Carnivora and Ken’s Dojo, among others. Live, he has also played with Evenrude, Ozzmosis, Dee Snider, etc.

Melodic Rock and AOR fans will have much to enjoy with the self-titled debut from these talented Norwegians.

“Can’t Blame It On The Rain”

“The Air That Breath”

Marianne Hagen: Female voice on If You Fall

Sun Sep 12 , 2021
Before Jessica Alba established herself as a successful actress and businesswoman, she encountered sexism while paving her path in the entertainment industry. In one of this week’s cover stories, Alba opens up to PEOPLE about how she felt pressure trying to prove that she is more than just her looks. […]